According to the BLS employment report, retailers hired seasonal workers in October and November at a higher pace than last year. 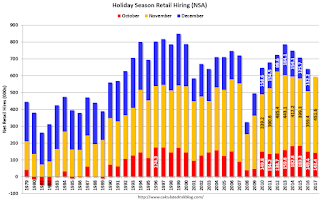 Retailers hired 595 thousand workers (NSA) net in October and November, this is up from just over 509 thousand for the same period last year, and about the same level as the previous four years.   Note: this is NSA (Not Seasonally Adjusted).

This suggests retailers are optimistic about the holiday season, even though some retailers are probably having trouble finding seasonal hires.