In November 2017, like in October 2017, U.S. rail traffic had both a glass-is-half-empty and a glass-is-half-full feel to it. It’s half empty because total carloads were down 0.9% (11,442 carloads) in November, their fifth straight year-over-year monthly decline after eight straight monthly increases. Railroads, of course, are concerned with their total level of business, not just particular commodities, so total carloads matter. Eight of the 20 categories the AAR tracks had carload declines in November, but three of these were especially important: coal (down 22,560 carloads, or 5.0%), grain (down 16,311 carloads, or 12.7%), and petroleum and petroleum products (down 3,877 carloads, or 7.2%). All three of these categories saw carload declines in November for reasons that don’t have much to do with the state of the economy. So, the half-full feel comes from the fact that many traffic categories that are more sensitive to the economy did relatively well in November (e.g., steel, up 6.9%; stone, clay, and glass products, up 6.0%; chemicals up 3.6%). That’s a good sign for the economy going forward. The fact that intermodal originations were up 3.8% (50,029 containers and trailers) in November and will almost certainly set a new annual record in 2017 is a good sign as well. 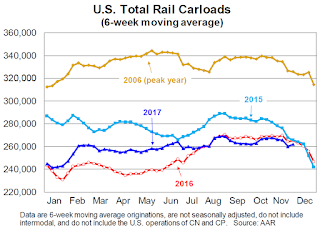 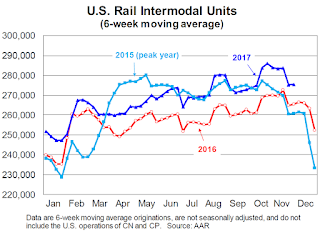