Claims taking procedures continue to be severely disrupted in the Virgin Islands. The ability to take claims has improved in Puerto Rico and they are now processing backlogged claims
emphasis added 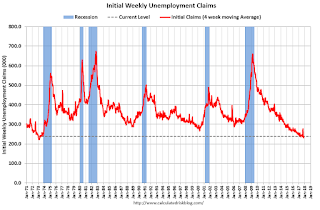 
The dashed line on the graph is the current 4-week average. The four-week average of weekly unemployment claims increased to 237,750.

This was above the consensus forecast. The low level of claims suggest relatively few layoffs.
Posted by Calculated Risk on 11/16/2017 08:33:00 AM
Newer Post Older Post Home