Industrial production rose 0.9 percent in October, and manufacturing increased 1.3 percent. The index for utilities rose 2.0 percent, but mining output fell 1.3 percent, as Hurricane Nate caused a sharp but short-lived decline in oil and gas drilling and extraction. Even so, industrial activity was boosted in October by a return to normal operations after Hurricanes Harvey and Irma suppressed production in August and September. Excluding the effects of the hurricanes, the index for total output advanced about 0.3 percent in October, and the index for manufacturing advanced about 0.2 percent.

With modest upward revisions for July through September, industrial production is now estimated to have only edged down 0.3 percent at an annual rate in the third quarter; the previously published estimate showed a decrease of 1.5 percent.

Total industrial production has risen 2.9 percent over the past 12 months; output in October was 106.1 percent of its 2012 average. Capacity utilization for the industrial sector was 77.0 percent, a rate that is 2.9 percentage points below its long-run (1972–2016) average.
emphasis added 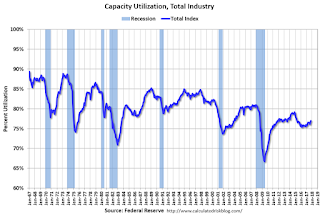 This graph shows Capacity Utilization. This series is up 9.4 percentage points from the record low set in June 2009 (the series starts in 1967). 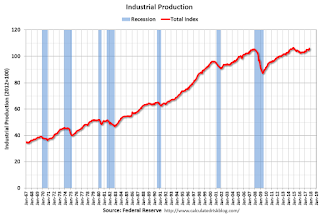