The Federal Reserve Bank of New York’s Center for Microeconomic Data today issued its Quarterly Report on Household Debt and Credit, which reported that total household debt increased by $116 billion (0.9%) to $12.96 trillion in the third quarter of 2017. There were increases in mortgage, student, auto and credit card debt (increasing by 0.6%, 1.0%, 1.9% and 3.1% respectively) and a modest decline in home equity lines of credit (HELOC) balances (decreasing by 0.9%).
...
Credit card and auto loan flows into delinquency increased. Specifically, credit card flows into delinquency have increased over the past year, while auto loan flows into delinquency have been steadily increasing for several years.
emphasis added 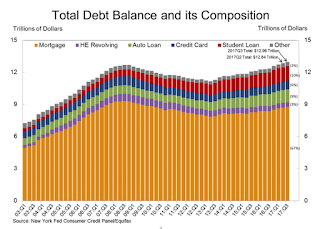 
Mortgage balances, the largest component of household debt, increased again during the third quarter. Mortgage balances shown on consumer credit reports on September 30 stood at $8.74 trillion, an increase of $52 billion from the second quarter of 2017. Balances on home equity lines of credit (HELOC) have been slowly declining; they dropped by $4 billion and now stand at $448 billion. Non-housing balances, which have been increasing steadily for nearly 6 years overall, saw a $68 billion increase in the third quarter. Auto loans grew by $23 billion and credit card balances increased by $24 billion, while student loans saw a $13 billion increase. 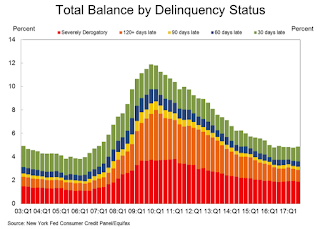 The overall delinquency rate increased in Q3.  From the NY Fed:


Aggregate delinquency rates ticked up slightly in the third quarter of 2017. As of September 30, 4.9% of outstanding debt was in some stage of delinquency. Of the $630 billion of debt that is delinquent, $408 billion is seriously delinquent (at least 90 days late or “severely derogatory”). Flows into delinquency deteriorated for some types of debt. The flow into 90+ delinquent for credit card balances has been increasing notably for one year, and that measure for auto loans has increased, and the flow into 90+ delinquency for auto loan balances has been slowly increasing since 2012.