From the MBA: Delinquencies Up in MBA’s National Delinquency Survey for Q3 2017


The delinquency rate for mortgage loans on one-to-four-unit residential properties increased to a seasonally adjusted rate of 4.88 percent of all loans outstanding at the end of the third quarter of 2017. The delinquency rate was up 64 basis points from the previous quarter, and was 36 basis points higher than one year ago, according to the Mortgage Bankers Association’s (MBA) National Delinquency Survey.

The serious delinquency rate, the percentage of loans that are 90 days or more past due or in the process of foreclosure, was 2.52 percent in the third quarter, up 3 basis points from the previous quarter, but 44 basis points lower than one year ago.

Marina Walsh, MBA’s Vice President of Industry Analysis, offered the following commentary on the survey:
“In the third quarter of 2017, the overall delinquency rate rose by 64 basis points over the previous quarter, with the 30-day delinquency rate accounting for 50 basis points of this variance. Hurricanes Harvey, Irma and Maria caused disruptions and destruction in numerous states. Florida, Texas, neighboring states, as well as devastated Puerto Rico, saw substantial increases in their past due rates. While forbearance is in place for many borrowers affected by these storms, our survey asks servicers to report these loans as delinquent if the payment was not made based on the original terms of the mortgage regardless of any forbearance plans in place.

“While the storms played a critical factor in explaining the rise in the overall delinquency rate, there are other factors to consider, especially given delinquency rate increases in other states not directly impacted by the storms. First, there were timing issues associated with the last day of the month being a Saturday. Processing for mortgage payments made over the weekend did not occur until Monday, October 2 and thus these mortgage payments were identified as 30-days delinquent per NDS definitions.

“Second, delinquency rates were already at historic lows in the second quarter of 2017. The FHA and VA delinquency rates were at their lowest levels since 1996 and 1979 respectively, while the conventional delinquency rate reached its lowest level since 2005. It would not be unexpected for delinquencies to eventually increase from these levels.
...
“It will likely take about three or four more quarters for the effects of the most recent hurricanes on the survey results to dissipate. That said, we see loan performance as still healthy and strong, supported by a positive employment and wage outlook. Thus far in 2017, job growth is averaging 169,000 jobs per month, unemployment rate has decreased from 4.8 to 4.1 percent, and wage growth is 3.8 percent on a year over year basis.”
emphasis added 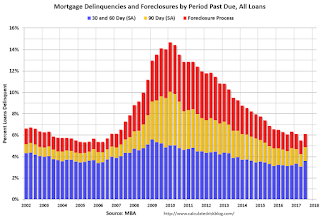 The percent of loans 30 and 60 days delinquent increased in Q3, primarily due to the hurricanes.

The 90 day bucket increased in Q3, and remains a little elevated.

The percent of loans in the foreclosure process continues to decline, and is close to normal levels.
Posted by Calculated Risk on 11/17/2017 10:41:00 AM
Newer Post Older Post Home