Note from the BLS on Puerto Rico:


The Puerto Rico household survey was conducted for the October 2017 reference period. However, the response rate was below average, in part as a result of difficulties accessing some remote areas that were significantly affected by Hurricanes Irma and Maria.


Unemployment rates were lower in October in 12 states, higher in 1 state, and stable in 37 states and the District of Columbia, the U.S. Bureau of Labor Statistics reported today. Twenty-three states had jobless rate decreases from a year earlier, 2 states and the District had increases, and 25 states had little or no change. The national unemployment rate edged down to 4.1 percent in October and was 0.7 percentage point lower than a year earlier.
...
Hawaii had the lowest unemployment rate in October, 2.2 percent, followed by North Dakota, 2.5 percent. The rates in Alabama (3.6 percent), Hawaii (2.2 percent), and Texas (3.9 percent) set new series lows. ... Alaska had the highest jobless rate, 7.2 percent. 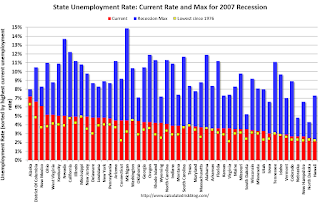 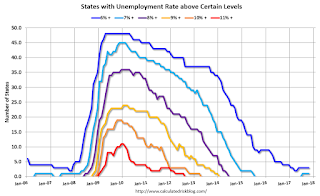