The FDIC released the Quarterly Banking Profile for Q3 today:


Higher net interest income, reflecting modest growth in interest-bearing assets and wider net interest margins, helped earnings increase in the third quarter. Quarterly net income at the 5,737 commercial banks and savings institutions insured by the FDIC rose to $47.9 billion, an increase of $2.4 billion (5.2 percent) from third quarter 2016.1 The average return on assets (ROA) rose to 1.12 percent from 1.10 percent a year earlier. More than two out of every three banks—67.3 percent—reported year-over-year increases in earnings, and 59.8 percent reported higher quarterly ROAs. Only 3.9 percent of banks reported net losses for the quarter, compared with 4.6 percent in third quarter 2016.
...
The Deposit Insurance Fund (DIF) balance increased by $2.9 billion, to $90.5 billion, during the third quarter. ... The DIF’s reserve ratio (the fund balance as a percent of estimated insured deposits) rose to 1.28 percent on September 30, 2017, from 1.24 percent at June 30, 2017, and 1.18 percent four quarters ago. The September 30, 2017, reserve ratio is the highest for the DIF since June 30, 2005, when the reserve ratio was also 1.28 percent.
emphasis added 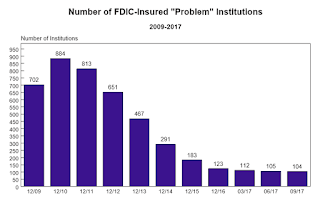 The FDIC reported the number of problem banks declined slightly: 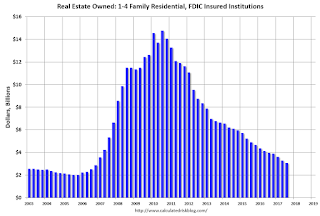 This graph shows the nominal dollar value of Residential REO for FDIC insured institutions. Note: The FDIC reports the dollar value and not the total number of REOs.

Since REOs are reported in dollars, and house prices have increased, it is unlikely FDIC institution REOs will get back to the $2.0 to $2.5 billion range back that happened in 2003 to 2005.    FDIC REOs will probably bottom close to the current level.
Posted by Calculated Risk on 11/21/2017 02:45:00 PM
Newer Post Older Post Home