Can investors use macro analysis?

Update: Here are five questions that people ask me all the time.
1. Are house prices in a bubble?
2. Is a recession imminent (within the next 12 months)?
3. Is the stock market a bubble?
4. Can investors use macro analysis?
5. Will Mr. Trump have a negative impact on the economy?

Since then I've discussed:
1) Are house prices in a new bubble?

2) Is a recession imminent (within the next 12 months)?

3) Is the stock market a bubble?

Today I will discuss: Can investors use macro analysis?

Macro is the analysis of the economy as a whole (GDP, Unemployment, inflation, demographics), as opposed to the analysis of individual companies (or individuals). Sometimes we can use macro trends to help with sector analysis.

An example of the later would the apartment sector. It was in 2010 that I started discussing the turnaround for apartments. Then, in January 2011, I attended the NMHC Apartment Strategies Conference in Palm Springs, and the atmosphere was very positive. My analysis was based on three factors: low volume of new supply, a large cohort moving into their 20s (the prime renting age), and people moving from owning to renting (the foreclosure crisis).   2010 and 2011 was a great time to invest in apartments.

Another example of macro sector analysis was in January 2009, when I wrote about the auto sector: Vehicle Sales. It was pretty easy to predict sales were near a bottom, and that auto sales would "increase significantly" going forward.

We can also use macro analysis to follow the business cycle.  However analysts have a poor track record in calling turns in the business cycle. As an example, ECRI called a recession in September 2011, and finally threw in the towel in May 2015.  If investors sold when ECRI first made their recession call in Sept 2011, they would have missed close to a 75% increase in the market!

Note: This is partially from a previous post and is NOT intended as investment advice.

Why are investors so focused on the business cycle? Obviously earnings decline in a recession, and stock prices fall too. The following graph shows the year-over-year (YoY) change in the S&P 500 (using average monthly prices) since 1970. Notice that the market usually declines YoY in a recession. 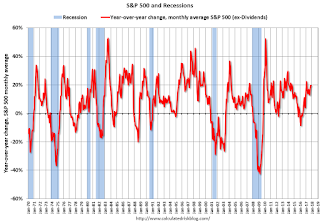 So calling a recession isn’t just an academic exercise, there is some opportunity to preserve capital.

Not all downturns in the stock market are associated with recessions. As an example, the 1987 market crash was during an economic expansion. And the stock bubble collapse lasted from March 2000 through early 2003 – and the only official economic recession during that period was 7 months in 2001.

Although I don’t give investment advice, I think investors should measure their performance with some index. Warren Buffett likes to use the S&P 500 index, so I also used the S&P 500 for this exercise.

Imagine if we could call recessions in real time, and if we could predict recoveries in advance. The following table shows the performance of a buy-and-hold strategy (with dividend reinvestment), compared to a strategy of market timing based on 1) selling when a recession starts, and 2) buying 6 months before a recession ends.


The “recession timing” column gives the annualized return for each of the starting dates. Timing the recession correctly always outperforms buy-and-hold. The last four columns show the performance if the investor is two months early (both in and out), one month early, one month late, and two months late. The investor doesn’t have to be perfect!

Note: This includes dividends, but not taxes. Also I assumed no interest earned when the investor is out of the market (money in the mattress).

The second table provides the same information, but this time in dollars (assuming a $10,000 initial investment)..

As economist Victor Zarnowitz said way back in 1960: “The record of predicting turning points — changes in the direction of economic activity — is on the whole poor." Forecasting hasn't improved much since then.

As an example, here are some comments from then Fed Chairman Alan Greenspan in 1990 (a recession began in July 1990):


“In the very near term there’s little evidence that I can see to suggest the economy is tilting over [into recession].”
Chairman Greenspan, July 1990

“...those who argue that we are already in a recession I think are reasonably certain to be wrong.”
Greenspan, August 1990

“... the economy has not yet slipped into recession.”
Greenspan, October 1990

I'd say he missed that downturn. Of course Wall Street and Fed Chairmen are notoriously bad at calling downturns.

But the track record for calling recoveries isn’t much better. ...  I was very lucky with the recent recession, but the key wasn’t calling the end in June 2009 (I thought it ended in July), but looking for the bottom in early 2009 (that is why I posted several times in early 2009 that I was looking for the sun).

This is NOT intended as investment advice. I am NOT an investment advisor. Just some (hopefully) fun musing ...
Posted by Calculated Risk on 11/15/2017 04:06:00 PM
Newer Post Older Post Home