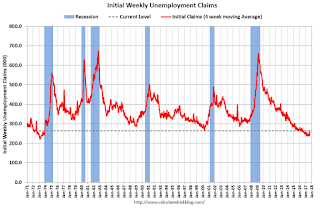 
The dashed line on the graph is the current 4-week average. The four-week average of weekly unemployment claims increased to 263,250.

The report next week will include the reference period (includes the 12th of the month) for the September employment report - and will provide a hint on the impact of the hurricanes on employment in September.
Posted by Calculated Risk on 9/14/2017 08:37:00 AM
Newer Post Older Post Home