The Consumer Price Index for Urban Wage Earners and Clerical Workers (CPI-W) increased 1.9 percent over the last 12 months to an index level of 239.448 (1982-84=100). For the month, the index increased 0.3 percent prior to seasonal adjustment.

The 2016 Q3 average was the highest Q3 average, so we only have to compare Q3 this year to last year. (Sometimes we have to look back two years).

For July and August 2017, the average is 239.0325 - or a 1.7% increase over the Q3 average last year.  Inflation probably picked up a little in September due to the increase in gasoline prices following Hurricane Harvey, so COLA will probably be close to 2%. 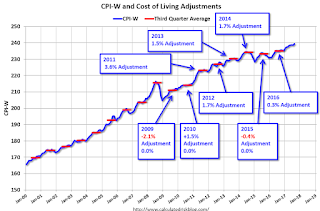 CPI-W was up 1.9% year-over-year in August, and although this is early - we still need the data for September - it appears COLA will be positive this year, and inflation probably picked up in September due to Hurricane Harvey and gasoline prices - so COLA will probably be close to 2% this year.

From Social Security: Cost-of-Living Adjustment Must Be Greater Than Zero


... ... any amount that is directly dependent for its value on the COLA would not increase. For example, the maximum Supplemental Security Income (SSI) payment amounts would not increase if there were no COLA.

... if there were no COLA, section 230(a) of the Social Security Act prohibits an increase in the contribution and benefit base (Social Security's maximum taxable earnings), which normally increases with increases in the national average wage index. Similarly, the retirement test exempt amounts would not increase ...

The contribution base will be adjusted using the National Average Wage Index. This is based on a one year lag. The National Average Wage Index is not available for 2016 yet, but wages probably increased again in 2016. If wages increased the same as last year, then the contribution base next year will increase to around $131,500 from the current $127,200.

Remember - this is an early look. We still need the data for September, but it appears COLA will be close to 2%, and the contribution base will increase next year.
Posted by Calculated Risk on 9/14/2017 11:01:00 AM
Newer Post Older Post Home