The Dodge Momentum Index fell 4.3% in September to 129.0 from its revised August reading of 134.8 (2000=100). The Momentum Index is a monthly measure of the first (or initial) report for nonresidential building projects in planning, which have been shown to lead construction spending for nonresidential buildings by a full year. The decline in September was the result of a 5.3% drop in institutional planning and a 3.6% decrease in commercial planning, retreating from the strong performance in August which benefitted from an influx of large projects ($100 million +) into planning. September’s decline follows five consecutive months of gains for the Momentum Index, and resumes for now the saw-tooth pattern that’s often been present in the data since 2014. Even with the recent volatility on a month-to-month basis, the Momentum Index continues to trend higher, signaling that developers have moved plans forward despite economic and political uncertainty. With the September release the Momentum Index is 5.1% higher than one year ago. The institutional component is 5.4% above its September 2015 reading, while the commercial component is up 4.9%
emphasis added 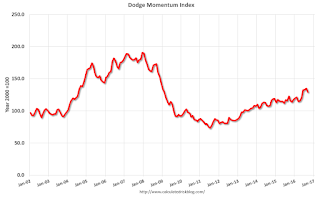 According to Dodge, this index leads "construction spending for nonresidential buildings by a full year". In general, this suggests further increases in CRE spending over the next year.
Posted by Calculated Risk on 10/07/2016 05:55:00 PM
Newer Post Older Post Home