According to Zillow’s August Case-Shiller forecast, the national index and both smaller 10 and 20-city indices look set to keep growing at a very similar rate as they have been for the past few months. After two full years of steady growth around 5 percent annually, the U.S. National Case-Shiller home price index is within striking distance of reaching its July 2006 peak levels, just 0.6 percent off those levels, according to today’s data.

Zillow’s August Case-Shiller forecast is shown in the table below. These forecasts are based on today’s July Case-Shiller data release and the August 2016 Zillow Home Value Index (ZHVI). The August S&P CoreLogic Case-Shiller Indices will not be officially released until Tuesday, October 25. 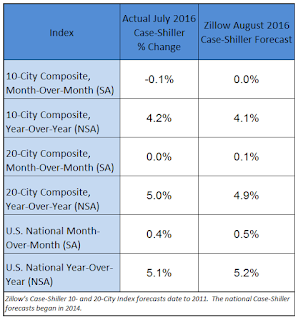