Manufacturing activity in the Fifth District continued to soften in September, but somewhat less so than in August, according to the Richmond Fed's latest survey. ...

This was the last of the regional Fed surveys for September. 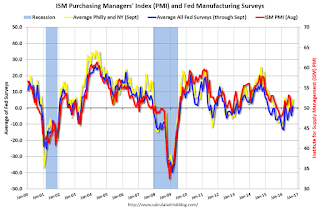 It seems likely the ISM manufacturing index will show expansion in September.
Posted by Calculated Risk on 9/27/2016 10:16:00 AM
Newer Post Older Post Home