Inventory remains a key issue. Here is repeat of two paragraphs I wrote about inventory a few months ago:

A key point: Some areas are seeing more inventory.   For example, there is more inventory in some coastal areas of California, in New York city and for high rise condos in Miami. 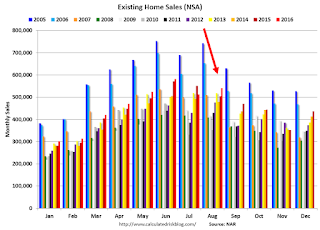 Sales NSA in August (red column) were the highest for August since 2006 (NSA).

Note that sales NSA were strong in August (up 7.3% from August 2015, and up 5.5% from last month), but there were more selling days this year - so the seasonally adjusted number was lower than last month.