May Case-Shiller data showed modestly slower growth largely in line with expectations, with seasonally adjusted home prices falling for two months in a row on the 10- and 20-city indices – a rare occurrence since the recovery began in earnest. Looking ahead, Zillow’s June Case-Shiller forecast calls for more of the same, with seasonally adjusted prices in the 10- and 20-city indices set to fall for a third straight month, while annual growth stays largely flat.

Zillow’s June Case-Shiller forecast is shown in the table below. These forecasts are based on today’s May Case-Shiller data release and the June 2016 Zillow Home Value Index (ZHVI). The June Case-Shiller Composite Home Price Indices will not be officially released until Tuesday, August 30. 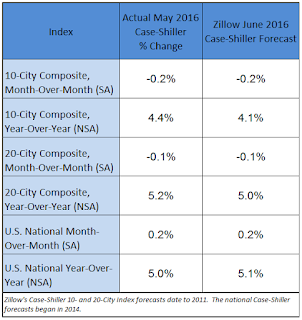