At the beginning of June the Census Bureau released its annual report for 2015 on the characteristics of new privately-owned residential structures, including but not limited to square footage, number of bedrooms and bathrooms, type of wall material, and sales prices. In terms of single-family homes completed last year, one of the more striking aspects of the report was the incredibly small number of modestly-sized single-family homes completed last year. Below is a summary of homes completed from 1999 to 2015 by square-footage ranges. 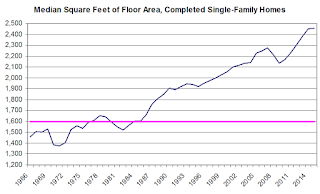 It is a little difficult to compare the distribution of single-family homes completed in recent years relative to earlier decades, because Census has changed the square-footage ranges in its reports over time. However, from 1999 to 2007 there are data for both the “old” ranges and the “new” ranges, and by looking at some historical relationships one can approximate completions for various ranges over time, which I have done in the table below.

There have been numerous articles over the last year or two discussing some of the possible reasons for the dearth of construction of moderately-sized (and priced) single-family homes over the past few years, and I won’t today discuss the “why’s.” However, it seems highly unlikely that single-family starts (and completions) will move back up to more “historic” levels unless there is a rebound in the construction of “smaller,” and less expensive, homes.
Posted by Calculated Risk on 6/16/2016 02:45:00 PM
Newer Post Older Post Home