CoreLogic: "Foreclosure Rate of 1.3 Percent is Back to December 2007 Levels"

From CoreLogic: National Overview through May 2015 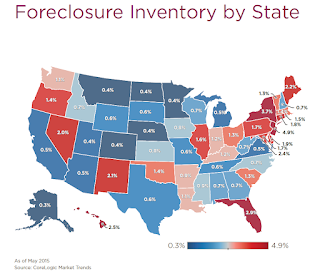 Here is a map from the May report that shows foreclosure inventory by state.

Some key "bubble" states - like Arizona and California - have mostly recovered.