The U.S. Census Bureau and the U.S. Bureau of Economic Analysis, through the Department of Commerce, announced today that the goods and services deficit was $51.4 billion in March, up $15.5 billion from $35.9 billion in February, revised. March exports were $187.8 billion, $1.6 billion more than February exports. March imports were $239.2 billion, $17.1 billion more than February imports.

The trade deficit much larger than the consensus forecast of $42.0 billion.

The first graph shows the monthly U.S. exports and imports in dollars through March 2015. 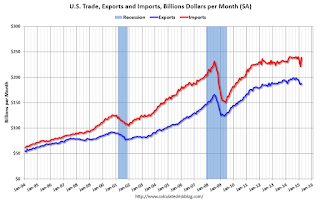 Imports and exports increased in March ( due a bounce back following the resolution of the West Coast port slowdown). 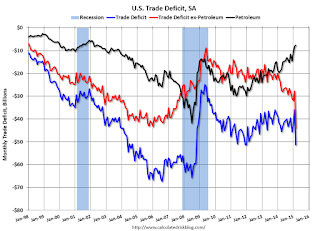 Oil imports averaged $46.47 in March, down from $49.53 in February, and down from $93.91 in March 2014.  The petroleum deficit has generally been declining and is the major reason the overall deficit has declined since early 2012.

Note: The deficit was larger than the BEA assumed for the advance GDP estimate, and this suggests GDP be revised down for Q1.
Posted by Calculated Risk on 5/05/2015 08:43:00 AM
Newer Post Older Post Home