From the Institute for Supply Management: April 2015 Non-Manufacturing ISM Report On Business®


Economic activity in the non-manufacturing sector grew in April for the 63rd consecutive month, say the nation’s purchasing and supply executives in the latest Non-Manufacturing ISM® Report On Business®. 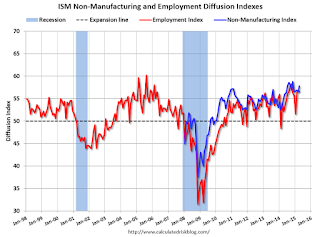 This was above the consensus forecast of 57.8% and suggests faster expansion in April than in March.  Overall this was a solid report.
Posted by Calculated Risk on 5/05/2015 10:05:00 AM
Newer Post Older Post Home