Inventory is still very low (down 0.5% year-over-year in January). This will be important to watch over the next few months at the start of the Spring buying season.

Note: As usually happens, housing economist Tom Lawler's estimate was closer than the consensus to the NAR reported sales rate.

Also, the NAR reported total sales were up 3.2% from January 2014, however normal equity sales were up even more, and distressed sales down sharply.  From the NAR (from a survey that is far from perfect):

Last year in December the NAR reported that 15% of sales were distressed sales.

Important: If total existing sales decline a little, or move side-ways - due to fewer distressed sales- that is a positive sign for real estate. 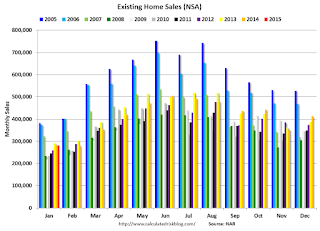 Sales NSA in January (red column) were slightly higher than last year (NSA), and below sales in January 2013.