The FDIC did not release an update on its enforcement action activities through November this week. We had anticipated the release as the FDIC's issuance pattern is on the last Friday of the month. However, President Obama provided federal workers an additional day off given that Christmas fell on a Thursday. So it looks like the FDUC will issue the release one day next week. Otherwise, there are no changes to report to the Unofficial Problem Bank List. Thus, the list ends the month and year holding 401 institutions with assets of $125.1 billion. A year ago, the list held 619 institutions with assets of $205.8 billion. During December 2014, the list declined by a net seven institutions after nine action terminations, one failure, one merger, and four additions. However, assets during the month rose by $405 million, which is the first monthly increase since September 2012. The asset increase ends a streak of 26 consecutive months of lower assets.

Given no changes this week, we decided to bring the transition matrix a week earlier than planned. For full details, see the accompanying table and a graphic depicting trends in how institutions have arrived and departed the list. Since publication of the Unofficial Problem Bank List started in August 2009, a total of 1,684 institutions have appeared on the list. Since year-end 2012, new entrants have slowed as 83 institutions have been added since then while 520 institutions have been removed. The pace of action terminations moved slightly higher in the latest quarter from the pace latest quarter. There has been a notable slowdown over the past six months (9.5 terminations per month average) compared with pace in the preceding 12 months (20 terminations per month average). Granted the list count is lower, but the per capita action termination rate of has slowed from 9.7 percent per quarter to 6.4 percent per quarter. At the start of the fourth quarter, there were 432 institution on the list with 30 institutions being removed because of action termination. 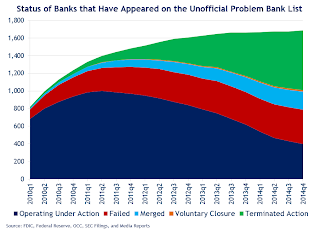 At the end of the fourth quarter, only 401 or 23.8 percent of the banks that have been on the list at some point remain. Action terminations of 676 account for about 53 percent of the 1,283 institutions removed. Although failures have slowed over the past two years, they do account for a significant number of institutions that have been removed from the list. Since publication, 387 of the institutions that have appeared on the list have failed accounting for more than 30 percent of all removals. Should another institution on the current list not fail, then nearly 23 percent of the 1,684 institutions that made an appearance on the list would have failed. A 23 percent default rate is more than double the rate often cited by media reports on the failure rate of banks on the FDIC's official list. Of the $673 billion in assets removed from the list, the largest amount of $297.4 billion is from failure while terminations still trail at $279.7 billion.