• Net income was $1.4 billion – the company’s eleventh consecutive quarter of positive earnings, compared to $4.0 billion in first quarter of 2014
• Based on June 30, 2014 net worth of $4.3 billion, the company’s September 2014 dividend obligation will be $1.9 billion, bringing total cash dividends paid to Treasury to $88.2 billion. 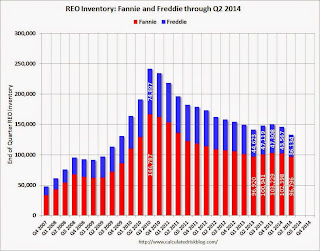 Here is a graph of Fannie and Freddie Real Estate Owned (REO).

REO inventory decreased in Q2 for both Fannie and Freddie.

Delinquencies are falling, but there are still a large number of properties in the foreclosure process with long time lines in judicial foreclosure states.