Here is another weekly update on housing inventory ...

There is a clear seasonal pattern for inventory, with the low point for inventory in late December or early January, and then usually peaking in mid-to-late summer.

The Realtor (NAR) data is monthly and released with a lag (the most recent data released this morning was for May).  However Ben at Housing Tracker (Department of Numbers) has provided me some weekly inventory data for the last several years. 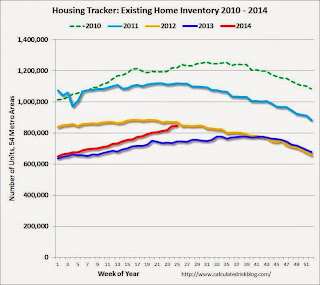 In 2011 and 2012, inventory only increased slightly early in the year and then declined significantly through the end of each year.

In 2013 (Blue), inventory increased for most of the year before declining seasonally during the holidays.  Inventory in 2013 finished up 2.7% YoY compared to 2012.

Inventory in 2014 (Red) is now 13.6% above the same week in 2013. (Note: There are differences in how the data is collected between Housing Tracker and the NAR).

I expect inventory to be above the same week in 2012 at the end of the month (prices bottomed in early 2012).   This increase in inventory should slow price increases, and might lead to price declines in some areas.

Note: One of the key questions for 2014 will be: How much will inventory increase?  My guess was inventory would be up 10% to 15% year-over-year at the end of 2014.  Right now it looks like inventory might increase more than I expected.