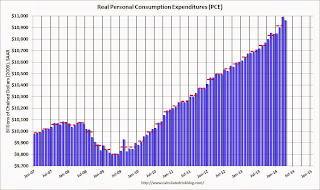 This is just one month for Q2 - and the month-to-month decline in PCE was due to the surge in spending in March (following the severe winter).
Posted by Calculated Risk on 5/30/2014 08:30:00 AM
Newer Post Older Post Home