Final May Consumer Sentiment at 81.9, Chicago PMI increases to 65.5 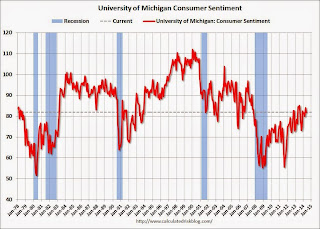 The final Reuters / University of Michigan consumer sentiment index for May decreased to 81.9 from the April reading of 84.1, and was up slightly from the preliminary May reading of 81.8.

This was below the consensus forecast of 82.5. Sentiment has generally been improving following the recession - with plenty of ups and downs - and a big spike down when Congress threatened to "not pay the bills" in 2011, and another smaller spike down last October and November due to the government shutdown.

Still waiting for sentiment to back at post-recession highs!


The Chicago Business Barometer increased to 65.5 in May from 63.0 in April, the highest since October, as demand strengthened and the economy continued to recover from a weather related slowdown in Q1. ...

Commenting on the MNI Chicago Report, Philip Uglow, Chief Economist at MNI Indicators said, “It looks pretty clear now that the slowdown in Q1 was due to the poor weather, with activity now back to or exceeding the level seen in Q4. The rise in the Barometer to a seven month high in May suggests we’ll see a significant bounceback in GDP growth this quarter following the contraction in Q1.”
emphasis added