[A]t the current point in the recovery from the 2001 recession, employment at all levels of government had increased by nearly 600,000 workers; in contrast, in the current recovery, government employment has declined by more than 700,000 jobs, a net difference of more than 1.3 million jobs.

By request, here is an update on an earlier post through the November employment report.

In April, I posted two graphs comparing changes in public and private sector payrolls during the Bush and Obama presidencies. Several readers asked if I could add Presidents Reagan and Clinton (I've also added the single term of President George H.W. Bush).  Below are updates through the September report.

The first graph shows the change in private sector payroll jobs from when each president took office until the end of their term(s).  President George H.W. Bush only served one term, and President Obama is in the first year of his second term. 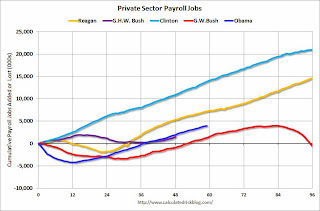 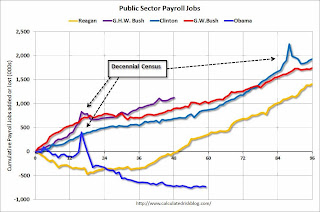 However the public sector has declined significantly since Mr. Obama took office (down 734,000 jobs). These job losses have mostly been at the state and local level, but more recently at the Federal level.  This has been a significant drag on overall employment.

Looking forward, I expect the economy to continue to expand for the next few years, so I don't expect a sharp decline in employment as happened at the end of Mr. Bush's 2nd term (In 2005 and 2006 I was warning of a coming recession due to the bursting of the housing bubble).

A big question is when the public sector layoffs will end.  It appears the cutbacks are mostly over at the state and local levels, but there are ongoing cutbacks at the Federal level - but overall - maybe public employment has bottomed.
Posted by Calculated Risk on 1/10/2014 02:46:00 PM
Newer Post Older Post Home