Update: When will payroll employment exceed the pre-recession peak?

Two years ago I posted a graph with projections of when payroll employment would return to pre-recession levels (see: Sluggish Growth and Payroll Employment from November 2011).

In 2011, I argued we'd continue to see sluggish growth (back in 2011 many analysts were forecasting another US recession - those forecasts were wrong). 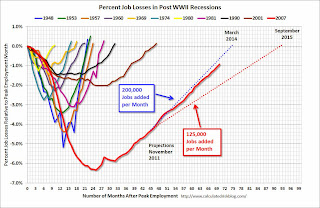 So far the economy has tracked just below the blue line (200,000 payroll jobs per month).

Right now it appears payrolls will exceed the pre-recession peak in mid-2014.

Currently there are about 1.3 million fewer payroll jobs than before the recession started, and at the recent pace of job growth it will take about 7 months to reach the previous peak.

Of course this doesn't include population growth and new entrants into the workforce (the workforce has continued to grow).