It appears house price increases have slowed recently based on agent reports and asking prices (a combination of a little more inventory and higher mortgage rates), but this slowdown in price increases is not showing up yet in the Case-Shiller index because of the reporting lag and because of the three month average (the September report was an average of July, August and September prices). I expect to see smaller year-over-year price increases going forward and some significant deceleration towards in early 2014.

Zillow's chief economist Stan Humphries said today: “Zillow’s own data, which excludes REO re-sales, shows the same markets that dominate the Case-Shiller indices – particularly some of the California markets – to be cooling. This suggests that Case-Shiller’s inclusion of REO re-sales is heavily skewing overall appreciation in these markets."

I also think many of us expect house price increase to slow.

Note: My image server (Google) was down this morning. Here are some graphs: 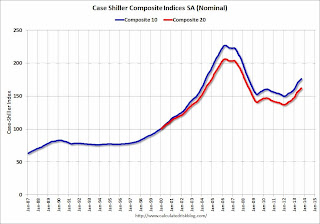 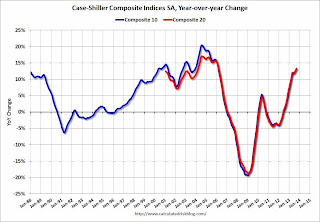 Prices increased (SA) in 20 of the 20 Case-Shiller cities in August seasonally adjusted.  Prices in Las Vegas are off 46.9% from the peak, and prices in Denver and Dallas are at new highs. 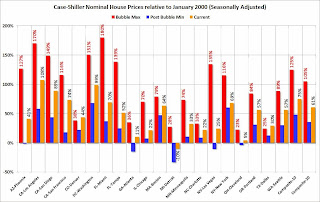 These are nominal prices, and as I noted above real prices (adjusted for inflation) are up about 38% since January 2000 - so the increase in Phoenix from January 2000 until now is about the change in inflation.