There were 3.9 million job openings on the last business day of September, little changed from August, the U.S. Bureau of Labor Statistics reported today. The hires rate (3.4 percent) and separations rate (3.2 percent) were little changed in September. ...
...
Quits are generally voluntary separations initiated by the employee. Therefore, the quits rate can serve as a measure of workers’ willingness or ability to leave jobs. Layoffs and discharges are involuntary separations initiated by the employer. ... The number of quits (not seasonally adjusted) increased over the 12 months ending in September for total nonfarm and total private, and was little changed for government. The number of quits rose in several industries. Over the year, quits increased in the Midwest, South, and West regions. 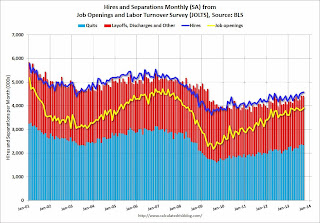 Jobs openings increased in September to 3.913 million from 3.844 million in August.  The number of job openings (yellow) is up 8.6% year-over-year compared to September 2012 and openings are at the highest level since early 2008.

Quits were mostly unchanged in September and are up about 18% year-over-year. These are voluntary separations. (see light blue columns at bottom of graph for trend for "quits").

Not much changes month-to-month in this report - and the data is noisy month-to-month, but the general trend suggests a gradually improving labor market.
Posted by Calculated Risk on 11/22/2013 10:00:00 AM
Newer Post Older Post Home