LPS released their Mortgage Monitor report for February today. According to LPS, 6.80% of mortgages were delinquent in February, down from 7.03% in January, and down from 7.28% in February 2012.

This gives a total of 10.18% delinquent or in foreclosure. It breaks down as: 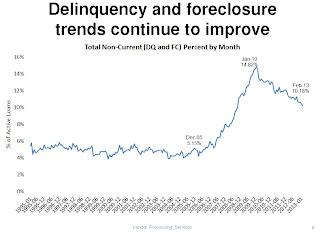 
The February Mortgage Monitor report released by Lender Processing Services found an increase in loan “cure” rates (those loans that were delinquent in the prior month and are now current). The majority of cures were on loans one-to-two months delinquent, with approximately 500,000 loans curing in February alone. As LPS Applied Analytics Senior Vice President Herb Blecher explained, these cures were not unusual, but rises seen in loans three-to-five months delinquent and foreclosure-initiated categories were unexpected.

“Historically, we see these seasonal increases in cure rates in February and March each year,” Blecher said. “What stood out in this month’s data was where that increase was centered. February’s rise in cures was driven almost entirely by FHA loans, representing a 29 percent increase from January, and likely driven by revived modification activity related to the revisions to the FHA’s Loss Mitigation Home Retention options released late last year.

“We also looked at loan modification data released in the Office of the Comptroller of the Currency’s Mortgage Metrics report (aggregated by LPS) and saw that, after two years of steady decline, modification volume increased substantially in the last half of 2012, with about 280,000 modifications occurring during that time,” Blecher continued. “The majority of the increases in both Q3 and Q4 occurred in proprietary modifications as opposed to through the Home Affordable Modification Program. Given the current FHA activity, along with the FHFA’s recent announcement of its Streamlined Modification Initiative, we could see continued strength in modification volumes in the future.” 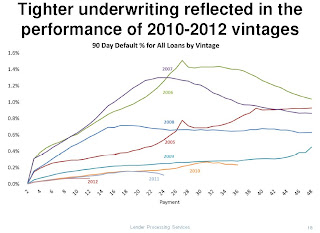 The second graph from LPS shows 90 day default percentage by vintage.  Clearly new loans are performing much better than the loans made during the bubble years.  This is even true for loans with similar risk attributes (same credit score, LTV).   Of course it helps that new borrowers are not "under water".