From the Institute for Supply Management: February 2013 Manufacturing ISM Report On Business® 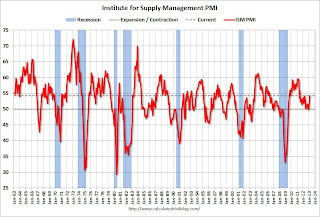 
The report was issued today by Bradley J. Holcomb, CPSM, CPSD, chair of the Institute for Supply Management™ Manufacturing Business Survey Committee. "The PMI™ registered 54.2 percent, an increase of 1.1 percentage points from January's reading of 53.1 percent, indicating expansion in manufacturing for the third consecutive month. This month's reading reflects the highest PMI™ since June 2011, when the index registered 55.8 percent. The New Orders Index registered 57.8 percent, an increase of 4.5 percent over January's reading of 53.3 percent, indicating growth in new orders for the second consecutive month. As was the case in January, all five of the PMI™'s component indexes — new orders, production, employment, supplier deliveries and inventories — registered in positive territory in February. In addition, the Backlog of Orders, Exports and Imports Indexes all grew in February relative to January."

This was above expectations of 52.8% and suggests manufacturing expanded at a faster pace in February. 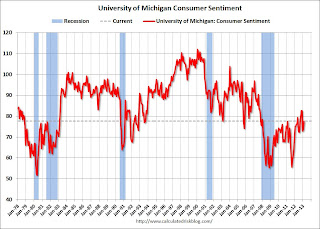 This was above the consensus forecast of 76.0, but still low. There are a number of factors that impact sentiment including unemployment, gasoline prices and, for 2013, the payroll tax increase, the default threat from Congress and the "sequester" spending cuts. People will slowly adjust to the payroll tax increase, and the threat of default is now behind us ... and sentiment has improved a little ... but the sequester cuts might hurt sentiment in March.
Posted by Calculated Risk on 3/01/2013 10:00:00 AM
Newer Post Older Post Home