The reporting on the Existing Home sales report was pretty negative yesterday even though I thought it was a solid report. And some of the positive reports were about prices - the NAR reported "The national median existing-home price for all housing types was $180,800 in December, which is 11.5 percent above December 2011" - and I completely ignore the median price.  What gives?

First, on prices, the median is impacted by the mix, and the mix changed in 2012 with fewer low end foreclosures.  I think the median price should be ignored during periods when the mix is changing (with all the repeat sales indexes available, I mostly ignore median prices all the time).

And on sales, the lead for many articles was that seasonally adjusted sales declined in December compared to November, and that sales were below the consensus forecast.   There were some suggestions that this called into question the "housing recovery".   Nonsense.

What is a "housing recovery"?  There are really two recoveries: House prices and residential investment.  Most people - homeowners and potential buyers - focus on prices, and for prices we should use the repeat sales indexes, and not the NAR median price (repeat sales indexes include Case-Shiller, CoreLogic, etc).  What matters in the NAR report for prices is inventory and months-of-supply.  And inventory is at the lowest level since January 2001, and months-of-supply fell to 4.4 months - the lowest since May 2005.

But for GDP and jobs, the key is what the Bureau of Economic Analysis (BEA) calls "residential investment" (RI) .  For existing homes, only the broker's commission is part of GDP, but for new homes the entire sales price is part of GDP.  There are some spillover effects from home sales (furniture, landscapting, etc), but those aren't included in RI. 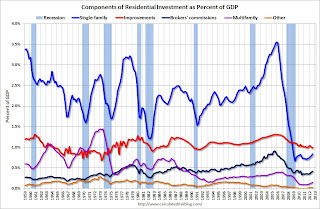 This graph shows the components for RI as a percent of GDP. According to the BEA, RI includes new single family structures, multifamily structures, home improvement, broker's commissions, and a few minor categories (dormitories, manufactured homes).

Usually the most important components are investment in single family structures followed by home improvement.

On home improvement, from the NAHB: Remodeling Market Remains Strong in the Fourth Quarter


The Remodeling Market Index (RMI) reached 55 in the fourth quarter of 2012, increasing five points from the previous quarter, according to the National Association of Home Builders (NAHB). This is the highest reading since the first quarter 2004.

I don't expect much of an increase in existing home sales in 2013, and I wouldn't be surprised by a decline depending on the number of foreclosures this year. But I think the housing recovery will remain fairly strong with new home sales and housing starts up sharply again this year.
Posted by Calculated Risk on 1/23/2013 02:01:00 PM
Newer Post Older Post Home