Happy New Year to all!

The key story of the week was the fiscal agreement. Unfortunately the media did an excellent job of confusing most people.

Remember - the "fiscal cliff" was about too much austerity too quickly (about reducing the deficit too quickly). The "fiscal cliff" included expiring tax cuts (income, payroll), expiring spending (unemployment insurance, etc.) and the "sequester" (a combination of defense and other spending cuts). The sequester has been delayed for two months, so we don't know the size of the cuts yet, but it appears the amount of austerity will not be large enough to drag the economy into a new recession. Still, austerity will be a drag in 2013 and that probably means another year of sluggish growth.

I would have argued for a different mix of policies, but reducing the amount of austerity was achieved - and this was a key goal for the fiscal agreement. Long term debt sustainability is still an issue (not part of the "fiscal cliff"), but the deficit is declining right now, and will decline further in 2013. This agreement contained some short term deficit reduction (just the end of the payroll tax cut will reduce the deficit by around $120 billion in 2013 compared to 2012).

It appears 2012 ended with sluggish growth. There are reasons for optimism for 2013, but the austerity at the Federal level will be a significant drag all year. 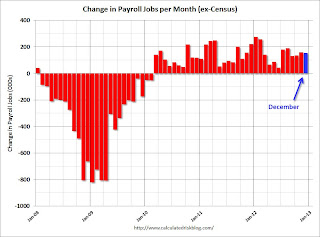 The headline number was at expectations of 157,000.  Employment for October was revised down slightly, and November payroll growth was revised up. 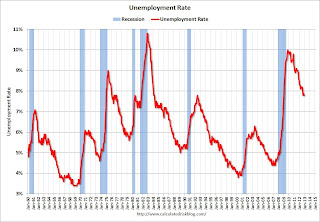 The Labor Force Participation Rate was unchanged at 63.6% in December (blue line. This is the percentage of the working age population in the labor force. 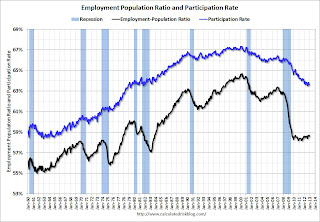 The participation rate is well below the 66% to 67% rate that was normal over the last 20 years, although a significant portion of the recent decline is due to demographics. 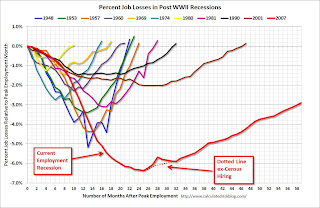 Here is a table of the change in payroll employment on an annual basis (before benchmark revisions - the revision through March 2012 will be released next month and will show more jobs added based on the preliminary estimate):


Employment growth in 2012 was mostly in line with expectations.  A little good news - it appears we are near the end of the state and local government layoffs, but the Federal government layoffs are ongoing. Look at the table - four consecutive years of public sector job losses is unprecedented since the Depression. 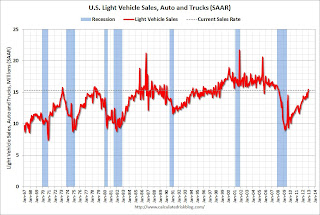 Based on an estimate from WardsAuto, light vehicle sales were at a 15.31 million SAAR in December. That is up 13% from December 2011, and down 1% from the sales rate last month.

This was above the consensus forecast of 15.1 million SAAR (seasonally adjusted annual rate). Note: Some of the increase in November was a bounce back from Hurricane Sandy that negatively impacted sales at the end of October, and sales might have been boosted slightly in December from some storm related bounce back.

Sales were up over 13% in 2012, and auto sales have been a key contributor to the economy over the last three years.  Sales will probably increase in 2013, but not at a double digit rate. 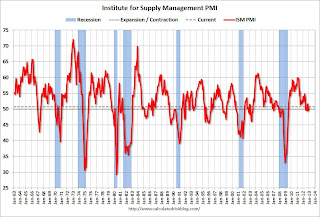 This was slightly above expectations of 50.5% and suggests manufacturing expanded in December. 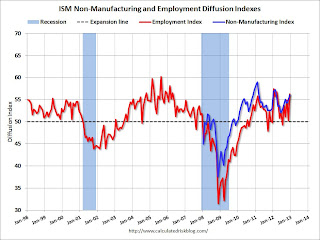 The December ISM Non-manufacturing index was at 56.1%, up from 54.7% in November. The employment index increased in December to 56.3%, up sharply from 50.3% in November. Note: Above 50 indicates expansion, below 50 contraction.

This was above the consensus forecast of 54.5% and indicates faster expansion in December than in November. The internals were strong with both the employment index and new order index up.


The U.S. Census Bureau of the Department of Commerce announced today that construction spending during November 2012 was estimated at a seasonally adjusted annual rate of $866.0 billion, 0.3 percent below the revised October estimate of $868.2 billion. The November figure is 7.7 percent above the November 2011 estimate of $804.0 billion. 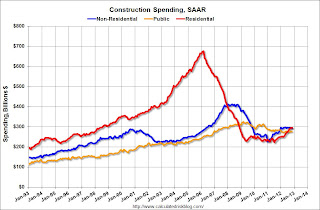 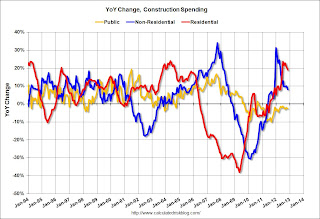 Public construction spending is now 15% below the peak in March 2009 and just above the post-bubble low.


All Housing Investment and Construction Graphs 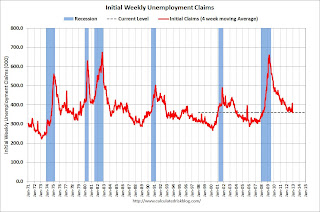 Weekly claims were above the 363,000 consensus forecast.

The dashed line on the graph is the current 4-week average. The four-week average of weekly unemployment claims increased to 360,000.

Weekly claims are very volatile during the holiday season, but the 4-week average finished 2012 near the low for the year.