Existing Home Inventory up 2% in mid-January

One of key questions for 2013 is Will Housing inventory bottom in this year?.

If inventory does bottom, we probably will not know for sure until late in the year. In normal times, there is a clear seasonal pattern for inventory, with the low point for inventory in late December or early January, and then peaking in mid-to-late summer.

The NAR data is monthly and released with a lag.  However Ben at Housing Tracker (Department of Numbers) kindly sent me some weekly inventory data for the last several years. This is displayed on the graph below as a percentage change from the first week of the year.

In 2010 (blue), inventory followed the normal seasonal pattern, however in 2011 and 2012, there was only a small increase in inventory early in the year, followed by a sharp decline for the rest of the year.

So far - and this is very early - it appears inventory is increasing at a more normal rate. 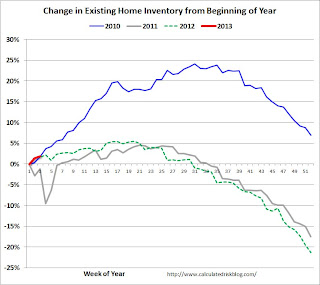 The key will be to see how much inventory increasses over the next few months. In 2010, inventory was up 8% by early March, and up 15% by the end of March.

So far in 2013, inventory is up 2%, and the next several weeks will be very interesting for inventory!