Definitions from the BLS:
Civilian noninstitutional population: "consists of persons 16 years of age and older residing in the 50 States and the District of Columbia who are not inmates of institutions (for example, penal and mental facilities and homes for the aged) and who are not on active duty in the Armed Forces". If you look at the first graph below, the total of the Blue, Red, and light brown areas is the Civilian noninstitutional population.

"The civilian labor force consists of all persons classified as employed or unemployed". This is Blue and Red combined on the first graph.

"The labor force participation rate represents the proportion of the civilian noninstitutional population that is in the labor force." So this is Blue and Red, divided by all areas combined.

"The employment-population ratio represents the proportion of the civilian noninstitutional population that is employed." This is Blue divided by the total area.

"The unemployment rate is the number of unemployed as a percent of the civilian labor force." This is Red divided by Red and Blue combined. This is the REAL unemployment rate (some claim U-6 is the "real rate", but that is nonsense - although U-6 is an alternative measure of underemployment, it includes many people working part time). 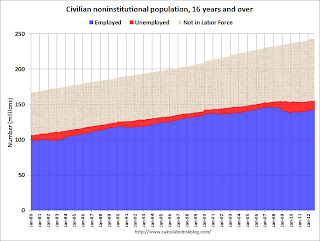 There are some bumps in the total area - usually when there is a decennial census. These are due to changes in population controls.

However the combined area, the civilian labor force, has not increased much - even though the civilian noninstitutional population has been increasing. Some people argue that this evidence of a large number of people who left the labor force because of the weak labor market - and that the actual unemployment rate should be much higher than 7.9%. 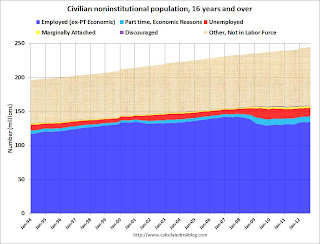 The second graph is similar to the first graph, but breaks the data down by a few more categories. Some of this data is only available since January 1994.

The yellow area is marginally attached workers. "These individuals were not in the labor force, wanted and were available for work, and had looked for a job sometime in the prior 12 months. They were not counted as unemployed because they had not searched for work in the 4 weeks preceding the survey."

Part time for economic reasons, marginally attached workers, and discouraged workers are all included in U-6, an alternate measure of labor underutilization. 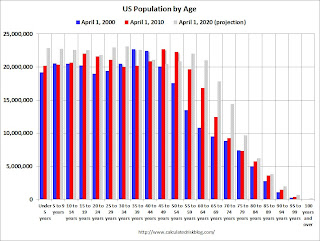 The third graph shows the number of people in the US by age group from both the 2000 and 2010 decennial Census, and a recent Census Bureau projection for 2020.

A second key demographic is the significant increase in people in the 15-to-19 and 20-to-24 age groups. These groups have lower participation rates usually because of school enrollment - and enrollment has been increasing.

Taken together, it is clear why the labor force hasn't increase as quickly as the civilian noninstitutional population, and therefore, why a decline in the labor force participation rate was expected.

Also - in 2010, the group with the highest population was in the '45 to 49 age group, followed by the '50 to 54 age group. By 2020, the seven groups with the highest projected population will all be under 35! Sure, some geezers will hang around, and that will push down the overall participation rate - but there is a new engine of growth coming.