The following article inspired me to look up some data today on heavy truck sales in the US.

Neil Irwin wrote in the WaPo on Friday: What cars and big rigs say about the economy


Less trucking activity, of course, means less demand for trucks. That is ... evident from this week’s earnings. Cummins, an Indiana company that makes truck engines, said it will cut up to 1,500 jobs by the end of the year amid weakening demand. “As a result of the heightened uncertainty, end customers are delaying capital expenditures in a number of markets, lowering demand for our products,” Cummins chief executive Tom Linebarger said in a statement Tuesday.

And Alcoa, the giant aluminum company, cited less demand from the trucking industry as it downgraded its forecasts. “Heavy trucks and trailer,” Alcoa chief executive Klaus Kleinfeld said in a conference call with analysts Tuesday, is “down compared to the view that we had in the first quarter. North America is really driving it. We believe that heavy truck production will slow down in the second half of the year.”
emphasis added

I think the key quote is truck sales are "down compared to the view that we had in the first quarter" - actually heavy truck sales are up, and at the highest level since April 2007. 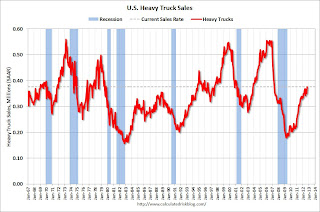 This graph shows heavy truck sales since 1967 using data from the BEA. The dashed line is current estimated sales rate.

Heavy truck sales really collapsed during the recession, falling to a low of 181 thousand in April 2009 on a seasonally adjusted annual rate (SAAR). Since then sales have doubled and hit 376 thousand SAAR in September 2012.

This is up 12% from September 2011, and the highest level since April 2007 (over 5 years ago). That is pretty strong growth, but I guess Alcoa was expecting more.