Schedule for Week of Sept 9th

The key event this week is the two day FOMC meeting on Wednesday and Thursday. There is a very strong possibility that the Fed will provide additional accommodation.

The key reports for this week will be the July trade balance report on Tuesday, the August retail sales report on Friday, Industrial Production on Friday, and August CPI also on Friday.

In Europe, Germany's Constitutional Court is expected to rule if the European Stability Mechanism (ESM, the proposed permanent replacement for the EFSF or European Financial Stability Facility) is constitutional on Wednesday at 6 AM ET. 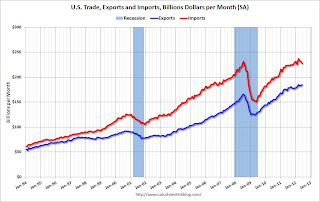 This graph is through June. Exports increased in June and imports decreased. Some of the decline in June was due to falling oil prices. According to the EIA, Brent futures average $110.34 in May, but declined to $95.16 in June, before increasing to $102.62 in July. There is a lag between future prices and import prices, but this suggests the dollar value of oil imports (per barrel) probably increased a little in July.

The consensus is for the U.S. trade deficit to increase to $44.3 billion in July, up from from $42.9 billion in June. Export activity to Europe will be closely watched due to economic weakness. 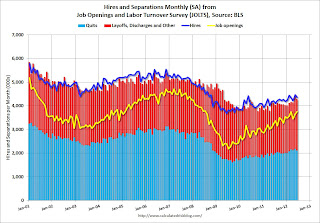 10:00 AM: Job Openings and Labor Turnover Survey for July from the BLS.

Jobs openings increased in June to 3.762 million, up from 3.657 million in May. The number of job openings (yellow) has generally been trending up, and openings are up about 16% year-over-year compared to June 2011. This was the most job openings since mid-2008.

8:30 AM: Import and Export Prices for August. The consensus is a for a 1.5% increase in import prices

10:00 AM: Monthly Wholesale Trade: Sales and Inventories for July. The consensus is for a 0.4% increase in inventories.

2:00 PM: FOMC Forecasts The will include the Federal Open Market Committee (FOMC) participants' projections of the appropriate target federal funds rate along with the quarterly economic projections. 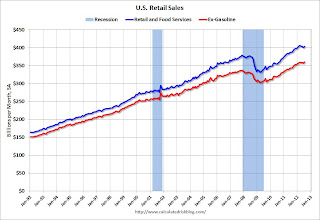 This graph shows retail sales since 1992. This is monthly retail sales and food service, seasonally adjusted (total and ex-gasoline). Retail sales are up 21.9% from the bottom, and now 6.6% above the pre-recession peak (not inflation adjusted) 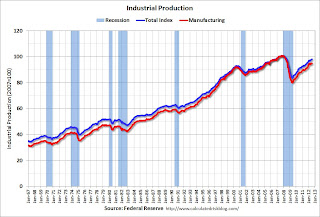 9:15 AM: The Fed will release Industrial Production and Capacity Utilization for August.

This shows industrial production since 1967.

The consensus is for Industrial Production a 0.1% decline in August, and for Capacity Utilization to decline to 79.2%.

9:55 AM: Reuter's/University of Michigan's Consumer sentiment index (preliminary for September). The consensus is for sentiment to decrease to 74.0 from 73.5 in August.

10:00 AM: Manufacturing and Trade: Inventories and Sales for July (Business inventories). The consensus is for 0.5% increase in inventories.
Posted by Calculated Risk on 9/08/2012 01:07:00 PM
Newer Post Older Post Home