“Factories reported only minimal overall growth in our region in September, and both production and new orders fell slightly” said Wilkerson. “But firms anticipate growth to pick up later this year and on into next year.”
...
The month-over-month composite index was 2 in September, down from 8 in August and 5 in July, and the lowest in nine months. The composite index is an average of the production, new orders, employment, supplier delivery time, and raw materials inventory indexes. ... The production index dropped from 7 to -4, and the shipments, new orders, and order backlog indexes also moved into negative territory. The employment index eased from 2 to 1, while the new orders for export index inched higher but remained below zero. Both inventory indexes eased but were still in positive territory.

This was below expectations of a 5 reading for the composite index. Here is a graph comparing the regional Fed surveys and the ISM manufacturing index: 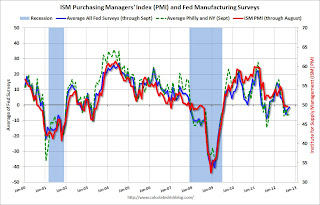 The ISM index for September will be released Monday, Oct 1st, and these surveys suggest another weak reading close to 50.
Posted by Calculated Risk on 9/27/2012 11:00:00 AM
Newer Post Older Post Home