A few comments on existing home sales and inventory ...

This was a decent report, not because sales increased, but because of the level of inventory. Based on historical turnover rates, I think "normal" sales would be in the 4.5 to 5.0 million range. So existing home sales at 4.82 million are in the normal range. However, a "normal" market would have very few distressed sales, so there is still a long ways to go. As I've noted before, no one should expect existing home sales to go back to 6 or 7 million per year. Instead the key to returning to "normal" is more conventional sales and fewer distressed sales.

And it appears the shift from distressed to conventional is ongoing, from the NAR this morning:

I'm not confident in the NAR measurement, but other sources suggest distressed sales have fallen in many areas.

The NAR reported inventory increased to 2.47 million units in August, up from 2.40 million in July. This is down 18.2% from August 2011, and down 13% from the inventory level in August 2005 (mid-2005 was when inventory started increasing sharply). This is about the same level for inventory as in August 2004.

I expect that the largest year-over-year declines in inventory are now behind us. It is very likely that each reported price increase will be met with more supply from sellers "waiting for a better market". I don't expect prices to fall to new lows in most areas, but this new inventory will probably limit any price increases.

Important: The NAR reports active listings, and although there is some variability across the country in what is considered active, most "contingent short sales" are not included. "Contingent short sales" are strange listings since the listings were frequently NEVER on the market (they were listed as contingent), and they hang around for a long time - they are probably more closely related to shadow inventory than active inventory. However when we compare inventory to 2005, we need to remember there were no "short sale contingent" listings in 2005. In the areas I track, the number of "short sale contingent" listings is also down sharply year-over-year. 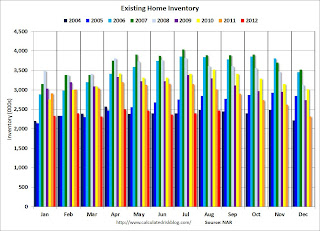 The following graph shows inventory by month since 2004. In 2005 (dark blue columns), inventory kept rising all year - and that was a clear sign that the housing bubble was ending. 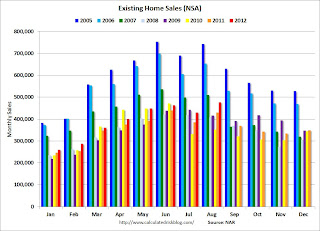