For the last few months, the economic data has been weak and disappointing. Last week I joked: "Luckily there are a few housing reports next week, so all the data will not be grim.", and sure enough the housing data was better than expected (still historically weak, but definitely improving).

Housing started the week off with July home builder confidence at the highest level since March 2007. Then housing starts for June were reported at 760 thousand, and finally the existing home sales report showed the largest year-over-year decline in inventory ever reported. (Sales were weaker than expected, but the key number in the NAR report is inventory).

There were a couple of non-housing positives: Industrial production was up in June, and inflation was benign.

• Housing Starts increased to 760 thousand in June, Highest since October 2008 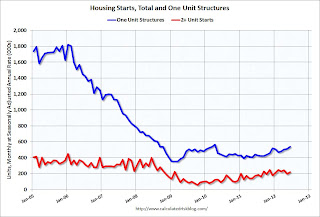 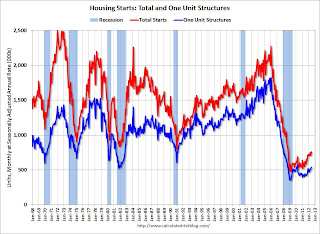 This shows the huge collapse following the housing bubble, and that total housing starts have been increasing lately after moving sideways for about two years and a half years.

This was above expectations of 745 thousand starts in June. This is another fairly strong housing report. 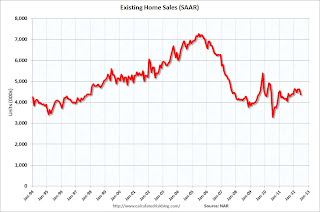 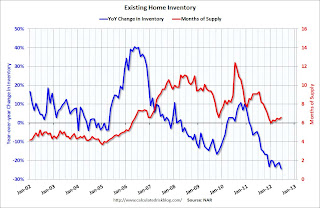 Inventory decreased 24.4% year-over-year in June from June 2011. This is the sixteenth consecutive month with a YoY decrease in inventory, and the largest year-over-year decline reported.

Months of supply increased to 6.6 months in June.

This was below expectations of sales of 4.65 million. However, as I've noted before, those focusing on sales of existing homes, looking for a recovery for housing, are looking at the wrong number. For existing home sales, the key number is inventory - and the sharp year-over-year decline in inventory is a positive for housing. 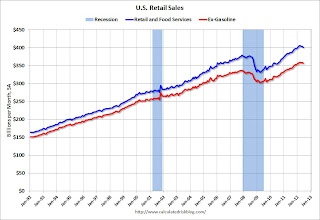 Sales for May were unchanged at a 0.2% decrease.

Retail sales are up 21.2% from the bottom, and now 6.0% above the pre-recession peak (not inflation adjusted)

The next graph shows the year-over-year change in retail sales and food service (ex-gasoline) since 1993. 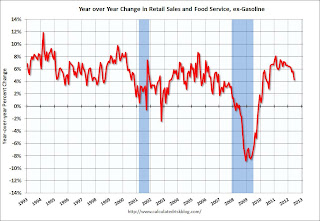 Some of the decrease was related to the decline in gasoline prices, but this is another indicator of a weak June. 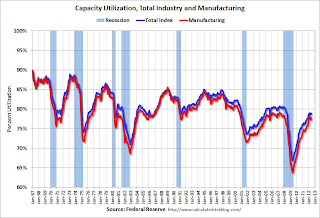 This graph shows Capacity Utilization. This series is up 12.1 percentage points from the record low set in June 2009 (the series starts in 1967). 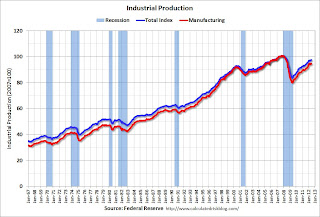 Industrial production increased in June to 97.4. This is 16.7% above the recession low, but still 3.3% below the pre-recession peak. 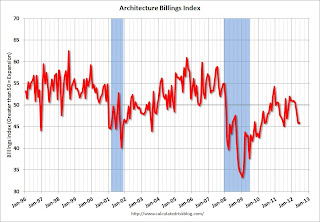 This graph shows the Architecture Billings Index since 1996. The index was at 45.9 in June, up slightly from May. Anything below 50 indicates contraction in demand for architects' services.

Note: This includes commercial and industrial facilities like hotels and office buildings, multi-family residential, as well as schools, hospitals and other institutions.

According to the AIA, there is an "approximate nine to twelve month lag time between architecture billings and construction spending" on non-residential construction. This suggests further weakness in CRE investment later this year and into next year (it will be some time before investment in offices and malls increases). 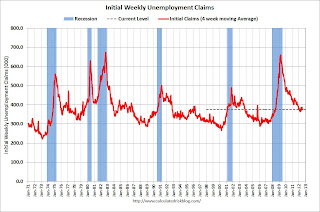 Here is a long term graph of weekly claims:
The dashed line on the graph is the current 4-week average. The four-week average of weekly unemployment claims declined to 375,500.

The sharp decline last week due to onetime factors, and some increase was expected.

This was well above the consensus forecast of 365,000 and suggests ongoing weakness in the labor market. 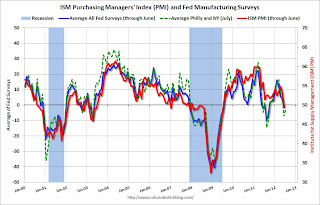 The general business conditions index rose five points to 7.4. New orders, however, declined, as that index slipped into negative territory for the first time since November 2011, falling five points to -2.7.


The survey’s broadest measure of manufacturing conditions, the diffusion index of current activity, increased from a reading of −16.6 in June to −12.9. This marks the third consecutive negative reading for the index ...

Here is a graph comparing the regional Fed surveys and the ISM manufacturing index. The dashed green line is an average of the NY Fed (Empire State) and Philly Fed surveys through July. The ISM and total Fed surveys are through June.

The average of the Empire State and Philly Fed surveys increased in July, but the average is still negative (contraction).