Once again rail traffic was "mixed". This was mostly due to the year-over-year decline in coal traffic. Building related commodities were up such as lumber and crushed stone, gravel, sand. Lumber was up 11.4% from June 2011.


The Association of American Railroads (AAR) today reported U.S. rail carloads originated in June 2012 totaled 1,140,271, down 1.3 percent compared with June 2011. Intermodal volume in June 2012 totaled 996,022 containers and trailers, up 49,168 units or 5.2 percent compared with June 2011. The June 2012 average weekly intermodal volume of 249,006 units is the highest average for any June on record and the third highest for any month, behind August and October 2006.
...
“U.S. intermodal originations in 2012 through June are slightly ahead of 2006’s record pace, setting up the very real possibility that 2012 will be the highest-volume intermodal year ever for U.S. railroads,” said AAR Senior Vice President John T. Gray. “The recovery in intermodal traffic since the recession has been remarkable and is due in large part to railroads’ huge investments in their intermodal business that have improved rail intermodal’s reliability and efficiency.” 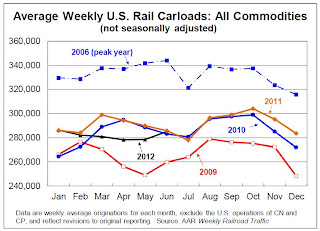 That’s the lowest percentage decline in five months, mainly because coal carloads weren’t as lousy as they have been. Coal carloads in June 2012 averaged 114,485 per week, the highest weekly average in four months and down just 6.2% from June 2011. Normally, a 6.2% year-over year decline is terrible, but compared to the 11% to 17% declines in the previous four months, it’s not so bad.

Grains are down due to fewer exports. 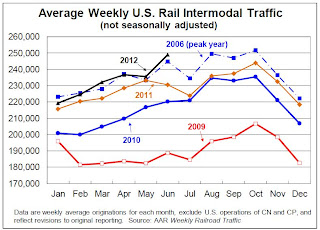 The top months for intermodal are usually in the fall, and it looks like intermodal traffic will be at record levels this year.