Yesterday I mentioned a post I wrote over four years ago - back when I was a housing grizzly bear - where I discussed housing and recoveries and pointed out that 1) housing is usually "an engine of recovery" and 2) "Given the current [back in early 2008] fundamentals of housing – significant oversupply, falling demand – it is very unlikely that housing will act as an engine of growth any time soon. We need to see a significant reduction in supply before there will be any increase in residential investment."

I've been asked to update the last two graphs in that post comparing the current recovery with previous recoveries.

The first graph is constructed by normalizing new home sales at the end of the previous six recessions. Then the median is plotted as a percent from the recession bottom. Note that month zero is the last month of each recession. Since sales are normalized, this doesn't show the recent historic collapse in sales - rather this is intended to show the relative strength of the recovery in percentage terms. 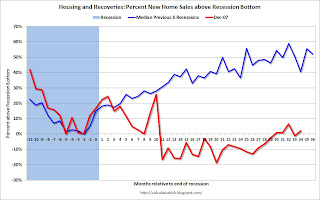 I've made two updates to the graph since four years ago: 1) I added the current recession and recovery, and 2) I extended the period after the end of the recession

Usually housing bottoms a few months before the rest of the economy, and then acts as an engine of growth coming out of the recession. Obviously housing performed terribly following the recent recession - with a small increase due to the tax credit, and then new lows and moving sideways for several years - just as predicted. 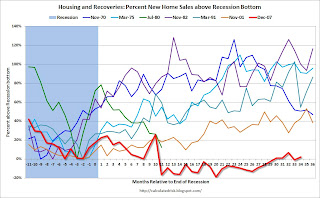 The second graph is the data for each of the last 7 recessions (including 2007). Housing didn't boom coming out of the 2001 recession because there was no significant collapse during the recession (an investment led recession). And new home sales faltered following the recession ending in July 1980 (green line) because of the double dip recession of 1980 and '81/'82.

These graphs show exactly what I expected over four years ago - a long period before housing recovers - and even now the recovery is sluggish.