Here are a few more comments and a long term graph from Reis.


[Strip mall] Vacancies finally began to fall during the first quarter, declining by 10 bps. This is the first quarterly decline in the vacancy rate since the second quarter of 2005. In the periods leading up to the recession, excess building was to blame for the increase in vacancies. Since the advent of the recession, supply growth has been virtually nonexistent, but anemic demand drove vacancies upward.

Despite the first quarterly decline in vacancy since 2005, Reis is not yet convinced that a recovery for shopping centers has commenced. However, this says just as much about the limited increases in supply as it does about resurgent demand. New completions remain near historically low levels. With such low levels of supply growth, any semblance of healthy demand would have pushed vacancy rates downward in a more pronounced fashion. ... With construction projected to remain at low levels, Reis expects vacancies to begin moving downwards slowly in 2012 as demand for space slowly begins to return.
...
Regional malls posted relatively healthy results in the first quarter, with national vacancies declining by 20 bps to 9.0% This was the second consecutive quarter of vacancy declines. Asking rents grew by 0.2%, marking the third consecutive quarter of rent increases. Although regional malls are faring better then neighborhood and community centers at this juncture, this has as much to do with supply as demand. While demand for malls, particularly higher‐quality malls, is arguably stronger than demand for neighborhood and community center space, regional malls did not experience massive supply increases before the recession the way neighborhood and community centers did. In fact, the first new regional mall in the U.S. in six years opened during the first quarter of 2012.

The outlook for 2012 remains muddled. Although demand appears to be gathering strength, the developments are not uniformly positive. Best Buy recently announced that it was closing 50 big‐box stores, but opening 100 new, smaller Best Buy Mobile stores. Although the net effect is a reduction in occupied square footage, it will have a detrimental impact on power centers while benefitting other subtypes such as regional malls. 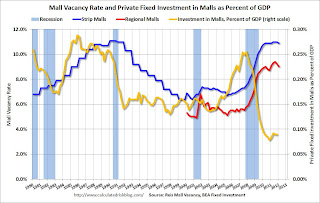 In the '00s, mall investment picked up as mall builders followed the "roof tops" of the residential boom (more loose lending). This led to a higher vacancy rate even before the recession, and then a sharp increase during the recession and financial crisis.

The good news is, as Severino noted, mall "completions remain near historically low levels", and the vacancy rate will probably continue to decline slowly.