There will be a two day meeting of the Federal Open Market Committee (FOMC) this coming Tuesday and Wednesday. I expect no changes to the Fed Funds rate, or to the program to "extend the average maturity of its holdings of securities" (scheduled to end in June), or to the program to "reinvest principal payments from its holdings of agency debt and agency mortgage-backed securities in agency mortgage-backed securities". I don't expect further accommodation (aka "QE3") to be announced at this meeting.

A few things to look for: 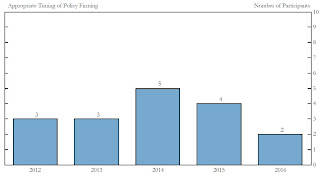 "The shaded bars represent the number of FOMC participants who project that the initial increase in the target federal funds rate (from its current range of 0 to ¼ percent) would appropriately occur in the specified calendar year."

The April chart will be compared to the January chart for any shift in views, but the changes will probably be minor. 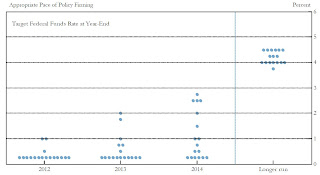 "The dots represent individual policymakers’ projections of the appropriate federal funds rate target at the end of each of the next several years and in the longer run. Each dot in that chart represents one policymaker’s projection."

Most participants will probably still think the Fed Funds rate will be in the current range into 2014.

2) Fed Chairman Press Briefing. At the press briefing, Chairman Bernanke will discuss the new FOMC forecasts including the two charts on the Fed funds rate. Growth forecasts were routinely revised down last year, but it appears that GDP forecasts will remain mostly unchanged this quarter. However the unemployment rate for 2012 will probably be revised down given that the March unemployment rate was already at the lower range of the FOMC's Q4 2012 forecast. The inflation forecast might be revised up slightly.

One again Bernanke will be asked about the possibility of a large scale MBS purchase program (QE3), and I expect he will leave the door open for further accomodation based on incoming data.

Here are the updated forecasts from the January meeting (including the November forecasts to show the change). The GDP projection for 2012 will probably be mostly unchanged.

The unemployment rate declined to 8.2% in March, and the projection for 2012 will probably be revised down.

The forecasts for overall and core inflation will probably be revised up slightly or left unchanged.

3) Possible Statement Changes. The FOMC met last month, and the economic data has been a little weaker since the March meeting - so the statement will probably be slightly more downbeat than the March statement.

As an example, the first two sentences in March might be changed slightly. From the March statement:

Information received since the Federal Open Market Committee met in January suggests that the economy has been expanding moderately. Labor market conditions have improved further; the unemployment rate has declined notably in recent months but remains elevated.

Perhaps "moderately" will be changed to "at a modest to moderate pace" as described in the recent Beige Book. And improvements in labor conditions have slowed. The phrase "prices of crude oil and gasoline have increased lately" could be removed, or altered to reflect that prices have been mostly stable since the March meeting.

Given the recent developments in Europe, investors will probably focus on any change to this sentence in the second paragraph: "Strains in global financial markets have eased, though they continue to pose significant downside risks to the economic outlook."

The sentence "The Committee ... currently anticipates that economic conditions ... are likely to warrant exceptionally low levels for the federal funds rate at least through late 2014" seems redundant given the FOMC Fed Funds rate projections, but might remain in the statement to make it clear there is no change to policy.

I expect the focus will once again be on the press briefing and the FOMC forecasts.