By request, a couple more graphs based on the January Personal Income and Outlays report. The first graph shows real personal income less transfer payments in 2005 dollars. This has been slow to recover - real personal income less transfer payments increased 0.2% in January. This remains 3.9% below the previous peak in early 2008. 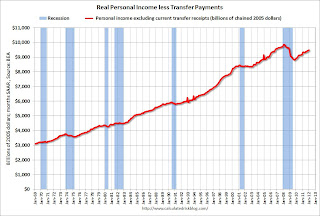 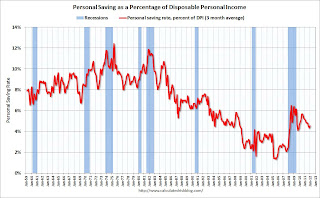 The second graph is for the personal saving rate.

The saving rate decreased to 4.6% in January.

This graph shows the saving rate starting in 1959 (using a three month trailing average for smoothing) through the January Personal Income report.

After increasing sharply during the recession, the saving rate has been moving down for the last two to three years - so spending growth has increased a little faster than income growth.
Posted by Calculated Risk on 3/04/2012 09:37:00 AM
Newer Post Older Post Home