This graph shows the NAR estimate of existing home inventory through December (left axis) and the HousingTracker data for the 54 metro areas through February. 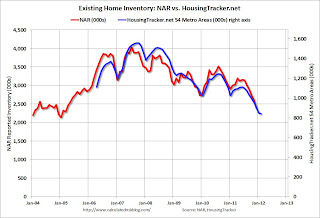 Since the NAR released their revisions for sales and inventory, the NAR and HousingTracker inventory numbers have tracked pretty well.

Seasonally housing inventory usually bottoms in December and January and then starts to increase again in February. So inventory should increase over the next 6 months.

The second graph shows the year-over-year change in inventory for both the NAR and HousingTracker. 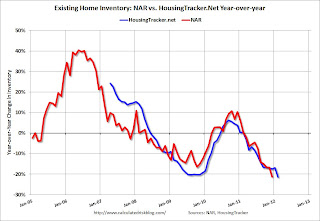 HousingTracker reported that the February listings - for the 54 metro areas - declined 21% from the same month last year. The year-over-year decline will probably start to slow since listed inventory is getting close to normal levels. Also if there is an increase in foreclosures (as expected), this will give some boost to listed inventory.

This is just inventory listed for sale, sometimes referred to as "visible inventory". There is also a large "shadow inventory" that is currently not on the market, but is expected to be listed in the next few years.

However listed inventory has clearly declined in many areas. And it is the listed months-of-supply (6.2 months as of December) combined with the number of distressed sales that mostly impacts prices.