Schedule for Week of Jan 22nd

The key U.S. economic report for the coming week is the Q4 advance GDP report to be released on Friday. Also New Home sales will be released on Thursday.

The Fed's FOMC holds a two day meeting on Tuesday and Wednesday, and Fed Chairman Ben Bernanke will hold a press conference following the FOMC announcement on Wednesday. The FOMC will release participants' projections of the appropriate target federal funds rate along with the usual quarterly economic projections.

On Tuesday, President Obama will present the State of the Union address. This might include mention of several housing initiatives.


----- Tuesday, Jan 24th -----
10:00 AM: Richmond Fed Survey of Manufacturing Activity for January. The consensus is for an increase to 6 for this survey from 3 in December (above zero is expansion).

10:00 AM: Regional and State Employment and Unemployment (Monthly) for December 2011

9:00 PM: State of the Union Address. President Obama will probably mention some housing policy initiatives such as the new HARP program (refinance activity will increase in March), an REO to rental program for Fannie and Freddie, and possibly the long rumored mortgage settlement agreement.


----- Wednesday, Jan 25th -----
7:00 AM: The Mortgage Bankers Association (MBA) will release the mortgage purchase applications index. This index was especially weak last year, although it has increased a little recently.

10:00 AM: FHFA House Price Index for November 2011. This is based on GSE repeat sales and is no longer as closely followed as Case-Shiller (or CoreLogic).

10:00 AM: Pending Home Sales Index for December. The consensus is for a 1.0% decrease in the index.

12:30PM: FOMC Meeting Announcement. No changes are expected to interest rates. The key change will be the release of Federal Open Market Committee (FOMC) participants' projections of the appropriate target federal funds rate along with the quarterly economic projections. 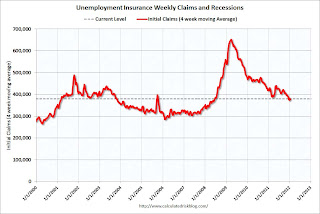 8:30 AM: The initial weekly unemployment claims report will be released.

The dashed line on the graph is the current 4-week average. The four-week average of weekly unemployment claims decreased last week to 379,000.

8:30 AM: Durable Goods Orders for December from the Census Bureau. The consensus is for a 2.0% increase in durable goods orders.

8:30 AM ET: Chicago Fed National Activity Index (December). This is a composite index of other data. 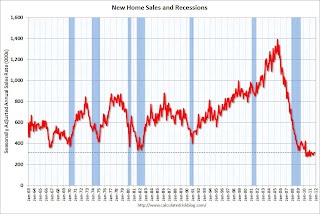 10:00 AM ET: New Home Sales for December from the Census Bureau.

This graph shows New Home Sales since 1963. The dashed line is the current sales rate.

The consensus is for a slight increase in sales to 320 thousand Seasonally Adjusted Annual Rate (SAAR) in December from 315 thousand in November. The consensus might be a little low based on the homebuilder confidence survey.

10:00 AM: Conference Board Leading Indicators for December. The consensus is for a 0.7% increase in this index.

11:00 AM: Kansas City Fed regional Manufacturing Survey for January. This survey was at -4 in December (contraction). 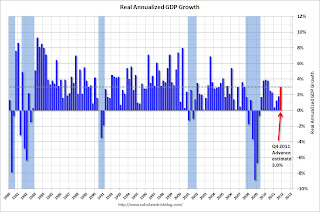 8:30 AM: Q4 GDP (advance release). This is the advance release from the BEA. The consensus is that real GDP increased 3.0% annualized in Q4.

This graph shows the quarterly GDP growth (at an annual rate) for the last 30 years.

The Red column is the forecast for Q3 GDP.

9:55 AM: Reuter's/University of Michigan's Consumer sentiment index (final for January). The consensus is for no change from the preliminary reading of 74.0.
Posted by Calculated Risk on 1/21/2012 01:15:00 PM
Newer Post Older Post Home