Continuing the positive momentum of a nearly three point bump in October, the Architecture Billings Index (ABI) reached its first positive mark since August. As a leading economic indicator of construction activity, the ABI reflects the approximate nine to twelve month lag time between architecture billings and construction spending. The American Institute of Architects (AIA) reported the November ABI score was 52.0, following a score of 49.4 in October. This score reflects an overall increase in demand for design services (any score above 50 indicates an increase in billings). The new projects inquiry index was 65.0, up dramatically from a reading of 57.3 the previous month.

“This is a heartening development for the design and construction industry that only a few years ago accounted for nearly ten percent of overall GDP but has fallen to slightly less than six percent,” said AIA Chief Economist, Kermit Baker, PhD, Hon. AIA. “Hopefully, this uptick in billings is a sign that a recovery phase is in the works. However, given the volatility that we’ve seen nationally and internationally recently, we’ll need to see several more months of positive readings before we’ll have much confidence that the U.S. construction recession is ending.” 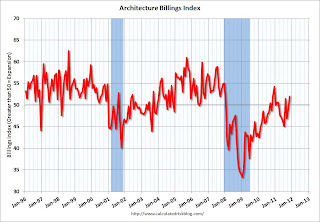 This graph shows the Architecture Billings Index since 1996. The index increased to 52.0 in November from 49.4 in October. Anything above 50 indicates expansion in demand for architects' services.

Note: This includes commercial and industrial facilities like hotels and office buildings, multi-family residential, as well as schools, hospitals and other institutions.

According to the AIA, there is an "approximate nine to twelve month lag time between architecture billings and construction spending" on non-residential construction. So this suggests further declines in CRE investment in 2012, but perhaps stabilizing later in 2012 - if this doesn't take another dip.