The National Association of Home Builders (NAHB) reports the housing market index (HMI) increased in November to 20 from 17 in October. Any number under 50 indicates that more builders view sales conditions as poor than good.

From the NAHB: Builder Confidence Rises Three Points in November


Builder confidence in the market for newly built, single-family homes rose by three points to 20 on the National Association of Home Builders/Wells Fargo Housing Market Index (HMI) for November, released today. The gain builds on a revised three-point increase in October, and brings the confidence gauge to its highest level since May of 2010.
...
“This second consecutive gain in the HMI is evidence that well-qualified buyers in select areas are being tempted back into the market by today’s extremely favorable mortgage rates and prices,” said NAHB Chief Economist David Crowe. “We are anticipating further, gradual gains in the builder confidence gauge heading into 2012 due to these pockets of improving conditions that are slowly spreading.”
...
Each of the HMI’s three component indexes continued to build on gains registered in the previous month in November. The component gauging current sales conditions rose three points to 20 – its highest level since May 2010 – while the component gauging future sales expectations rose two points to 25 – its highest level since March of 2011. The component gauging traffic of prospective buyers rose one point to 15, which was its highest point since May of 2010. 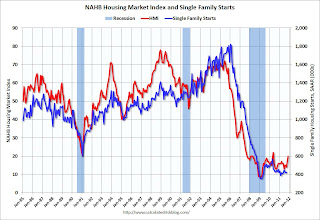 This graph compares the NAHB HMI (left scale) with single family housing starts (right scale). This includes the November release for the HMI and the September data for starts (October housing starts will be released tomorrow).

Both confidence and housing starts have been moving sideways at a very depressed level for several years. This is still very low, but this is the highest level since May 2010 - and that boost was due to the housing tax credit. Not counting the tax credit, the last time the index was above this level was in 2007.
Posted by Calculated Risk on 11/16/2011 10:00:00 AM
Newer Post Older Post Home